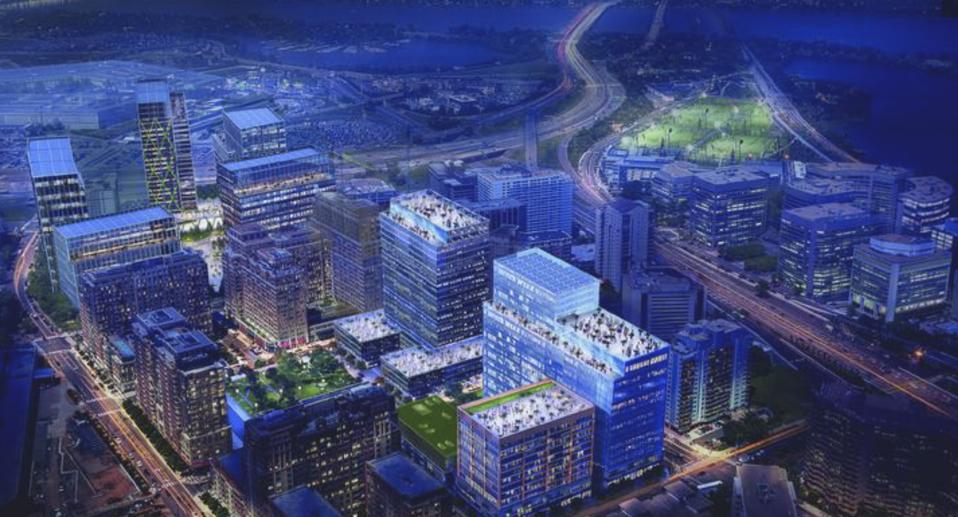 The plan to completely transform Crystal City, VA into Amazon’s
second headquarters is still meeting milestone after milestone, most recently with the acquisition of a Marriott Residence Inn. Acorn Development LLC, a subsidiary of Amazon, purchased the building for $148.5 million a few weeks ago from an affiliate of the Blackstone
Group LP. Blackstone purchased the property in July 2019 for $99 million.

This makes the entire 11-acre square block under Amazon control. Amazon’s partner in the HQ2 project, JBG Smith Properties, still owns large parts of the block but it has always been part of the approved plan for Amazon to purchase the remaining parcels once they receive approval from the planning board.

Exact plans for the site have not been released, but a spokesperson for Amazon said the company plans to tear down the existing Marriott during Phase 2 of its and start afresh by making the whole expanse of space into a pedestrian-friendly office park called PenPlace. This section of the city has long been seen as lacking vitality due to the minimal retail and restaurant options, especially since it has to compete with more social destinations such as Pentagon City Mall a few blocks away.

Phase 1 has already begun, with a nearby block starting to see cranes and other heavy machinery come to life. This block, now named Metropolitan Park, will have two 22-story towers, a daycare center, retail and restaurant storefronts, a dog park and other public green space. It is expected to be complete in 2023.

Amazon has already started hiring in the area, with approximately 1,000 local employees already on board. Most of them are working remotely during the pandemic, even though Amazon currently leases about 900,000 square feet of existing office space. This is in addition to the roughly 10,000 Amazon-affiliated employees that were already working in the D.C. region if you count all the data centers, grocery stores and delivery stations.

When Amazon announced Crystal City as its choice for HQ2 it committed to employing 25,000 people by 2030.

Roth 401(k) Vs Traditional 401(k): Investing Pre-Tax Or After-Tax
Mark Cuban on stalled stimulus negotiations: All of Congress is ‘complicit in the problem’
Stocks making the biggest moves midday: IBM, AMC Entertainment, Logitech, Travelers and more
JPMorgan Chase takes on Square and PayPal with smartphone card reader, faster deposits for merchants
China is open to taking on more debt if that’s what it takes to support the economy